In Pendant Smoke Evacuations Systems (IPSES) are now being specified in almost all new Australian and New Zealand Hospital projects. The Cockatoo Blue IPSES system has been installed in Melbourne’s Royal Women’s Hospital Complex including Frances Perry House. IPSES was also included in the John Hunter and Royal Newcastle redevelopments and a new variation of the system was developed with the Victorian Royal Children’s Hospital.

As well as new installations the system can be retrofitted into existing pendants and booms with little or no effect on functioning of an operating theatre. These systems have been fitted into Draeger, Trumpf, Esco, Claveguard pendants.

Is Your Work Place A Smoke Free Environment?

Across the world more and more work environments are becoming “SMOKE FREE” including Bars, Restaurants and even Public Places.  This change has occurred due to the acceptance of the dangers of cigarette smoke to the health of humans in general.

The operating theatre remains a “SMOKE ACCEPTABLE” environment due to the production of surgical smoke during the use of Diathermy (Electro) and Laser Surgery.  Worse: the plume produced during these procedures may be even worse than that from cigarettes.

Surgical plume contains similar Chemical Hazards to cigarette smoke including carcinogens such as: Benzene and Formaldehyde but it also contains the added hazards of infective virus and bacteria such as Hepatitis, Human Papilloma Virus and HIV.

These hazards can be greatly reduced by the use of a Smoke Evacuation System and the associated accessories. In fact the use of smoke evacuation is a requirement of the ACORN Standards: 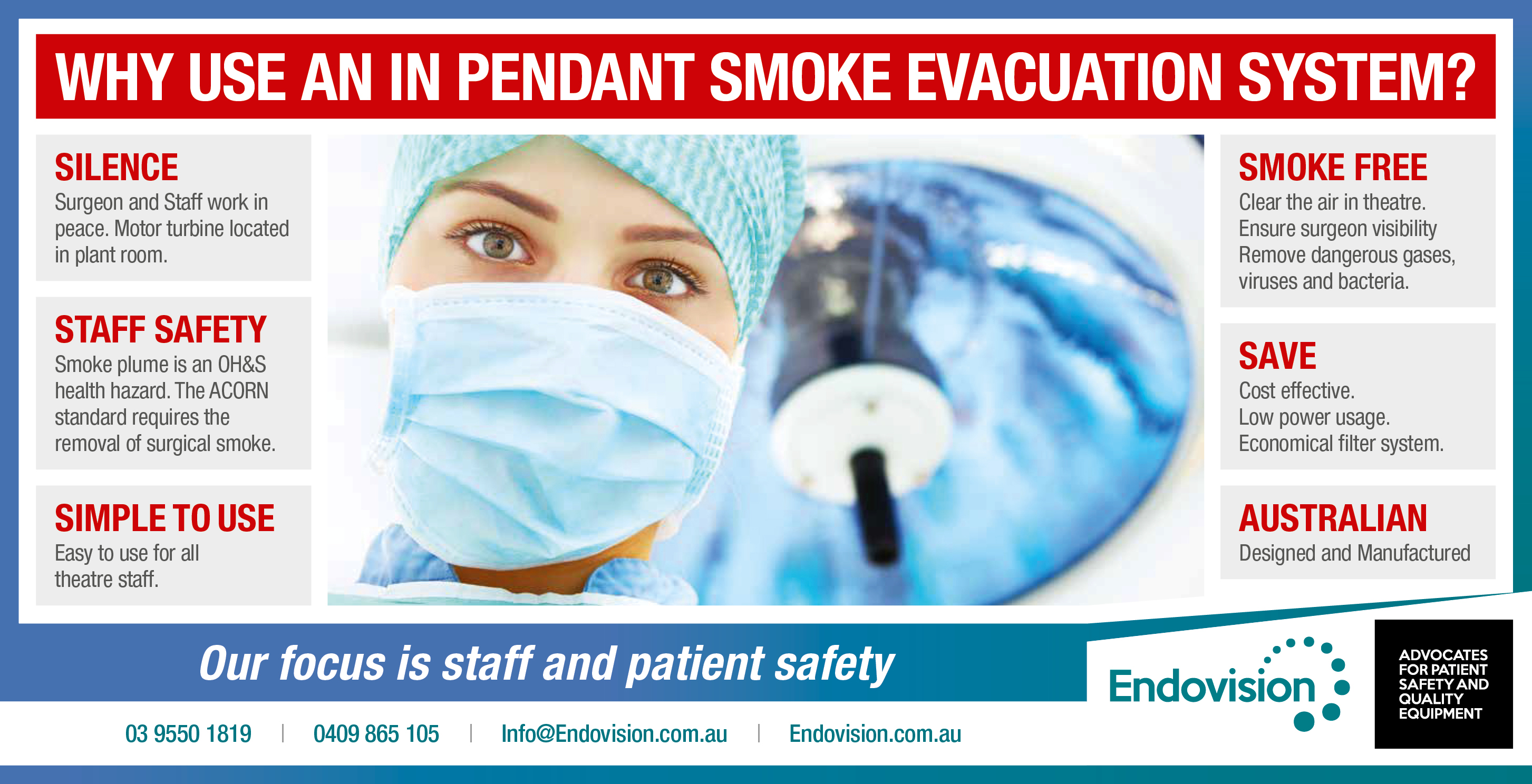 The use of Smoke Evacuation Systems has been resisted for many years due to issues surrounding COST, NOISE, SIZE of EQUIPMENT and ACCESSORIES.  All of these issues have now been addressed and there is no further reason to risk your health or that of your staff.

The IPSES (In Pendant Smoke Evacuation System) developed and built in Australia in conjunction with Hunter New England Health and Cockatoo Blue Medical Products is:

Silent –  There is no noise at all

Small  – The system is installed into the boom/pendant

Surgical smoke has been shown to contain a large number potential of Biological and Chemical hazards. It also reduces creates an offensive odour and reduces visibility for the surgical team.

The plume contains Carcinogens, Poisons and Infective Virus and Bacteria.

Visibility – The most obvious hazard of surgical smoke is that it reduces the visibility for the surgical team during a procedure.

Odour – The strong noxious and offensive odour produced by Electro and Laser surgery is permeates throughout the operating theatre during and after the procedure. This odour is the first warning sign of the danger of surgical smoke. The odour is caused by the dangerous chemicals present in the plume produced.

Biological Hazards – Multiple studies have shown that virus and bacteria are expelled with the surgical plume intact. These studies found that not only was the virus intact it was also still viable and infectious.

The Biological hazards released during Electro and Laser surgery include:

Also present are other Biologicals such as:

The Dangers associated with some these chemicals include:

From: CHEMICAL SUMMARY FOR ACETONITRILE (CAS NO. 75-05-8) prepared by OFFICE OF POLLUTION PREVENTION AND TOXICS U.S.EVIRONMENTAL PROTECTION AGENCY August 1994

“Symptoms of single or short-term exposure to acrolein may include irritation to the eyes, skin and the mucous membranes of the respiratory and gastrointestinal systems. It can be corrosive. Exposure can lead to decreased pulmonary function, pulmonary oedema (a build-up of fluid in the lungs, characterised by severe shortness of breath), and chronic respiratory disease.

Longer term exposure to acrolein may result in general respiratory congestion and eye, nose and throat irritation. Systemic effects to the respiratory, reproductive, neurological and haematological systems may also result.”

Breathing acrylonitrile for short periods of time adversely affects the nervous system, the blood, the kidneys, and the liver. These effects subside when exposure stops. Nervous system effects of AN range from headaches and dizziness to irritability, rapid heartbeat, and death. Symptoms of acrylonitrile poisoning may occur quickly after exposure or after levels of breakdown products like cyanide build up in the body. Direct contact with acrylonitrile liquid severely damages the skin. Acrylonitrile liquid or vapour irritates the eyes, the nose, and the throat. These effects are not likely to occur at levels of acrylonitrile that are normally found in the environment.

There are several health effects case studies of acrylonitrile workers. The methods used in these studies limit conclusions that can be made from the results. These studies show that workers repeatedly breathing small amounts of acrylonitrile over long periods of time may develop cancer. Cancer occurs primarily in the respiratory tract.”

“Benzene is found in the air from emissions from burning coal and oil, gasoline service stations, and motor vehicle exhaust. Acute (short-term) inhalation exposure of humans to benzene may cause drowsiness, dizziness, headaches, as well as eye, skin, and respiratory tract irritation, and, at high levels, unconsciousness.  Chronic (long-term) inhalation exposure has caused various disorders in the blood, including reduced numbers of red blood cells and aplastic anemia, in occupational settings.  Reproductive effects have been reported for women exposed by inhalation to high levels, and adverse effects on the developing fetus have been observed in animal tests.  Increased incidence of leukemia (cancer of the tissues that form white blood cells) have been observed in humans occupationally exposed to benzene.  EPA has classified benzene as a Group A, human carcinogen.”

“Formaldehyde is used mainly to produce resins used in particleboard products and as an intermediate in the synthesis of other chemicals.  Exposure to formaldehyde may occur by breathing contaminated indoor air, tobacco smoke, or ambient urban air.  Acute (short-term) and chronic (long-term) inhalation exposure to formaldehyde in humans can result in respiratory symptoms, and eye, nose, and throat irritation.  Limited human studies have reported an association between formaldehyde exposure and lung and nasopharyngeal cancer.  Animal inhalation studies have reported an increased incidence of nasal squamous cell cancer. EPA considers formaldehyde a probable human carcinogen (Group B1).”

“Toluene is added to gasoline, used to produce benzene, and used as a solvent.  Exposed to toluene may occur from breathing ambient or indoor air.  The central nervous system (CNS) is the primary target organ for toluene toxicity in both humans and animals for acute (short-term) and chronic (long-term) exposures. CNS dysfunction and narcosis have been frequently observed in humans acutely exposed to toluene by inhalation; symptoms include fatigue, sleepiness, headaches, and nausea.”

Surgical smoke plume is a dangerous by-product generated from the use of lasers, electro-surgical pencils, ultrasonic devices, and other surgical instruments. As these instruments cauterize vessels and destroy (vaporize) tissue, fluid, and blood, they create a gaseous material known as smoke plume. Throughout the world various regulatory bodies, professional organizations and standards organizations set standards, provide position statements, and offer guidance that govern surgical smoke evacuation procedures and other protective measures throughout the world.

ACORN is a professional organization that develops standards and recommendations to promote excellence in perioperative care. The following is ACORN’s standard:

The HSE is the enforcement authority in Great Britain. The following are HSE’s recommended practices and standards:

Medicines and Healthcare Products Regulatory Agency (MHRA) is responsible for regulating all medicines and medical devices in the UK by ensuring they work and are acceptably safe. The following is MHRA’s recommended practice:

Recommends that smoke evacuation systems are to be used during laser surgery. In addition, it is specified that masks and operating room laminar flow systems are not suitable for protection from surgical smoke.

Association for Perioperative Practice (AfPP) works to encourage the exchange of professional information between members and co-operation with other professional bodies. They are not a regulatory agency but a recommending agency. The following is AfPP’s standard:

The standard states that ‘Dedicated smoke evacuation machines must be used to remove the smoke…’ (AfPP 2007).

OSHA is the only U.S. regulatory body to date that has legal authority in the United States granted by Congress. They estimate that 500,000 healthcare workers are exposed to surgical smoke and bio-aerosols each year. On a number of occasions OSHA has reiterated that the management of surgical plume is a healthcare worker safety issue. They have also indicated that plume hazards fall under the scope of the following:

The CSA developed and released one of the furthest reaching standards relating to the management of surgical plume.

This standard details a comprehensive approach to managing plume and extends its mandates to all surgical settings based on risk assessment. General requirements include: